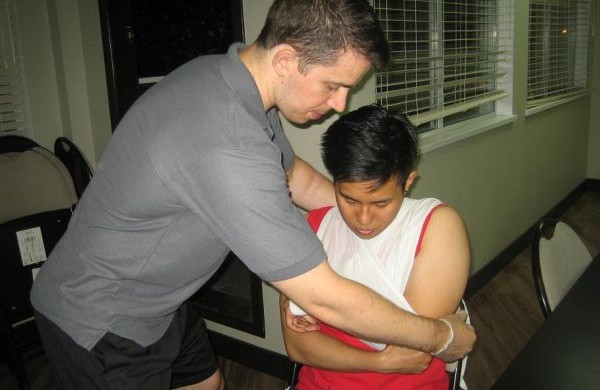 Upon approaching a scene of injury, one of the main things that should be assessed from the casualty by the paramedic, or any clinician with first aid training, are any possible fractures and/ or dislocations. Once these have been ruled out, soft-tissue structures, such as muscles, ligaments, the joint capsule, and bursae, are assessed using a variety of tests. This examination includes functional tests (i.e., active, passive, and resisted ROM), stress tests, special tests, neurologic testing, and sport- or activity-specific functional testing. As with all tests, the noninjured side should be evaluated first to establish normative data. All motions common to each joint should be tested. Occasionally, it also may be necessary to test the joints proximal and distal to the injury to rule out any referred pain. The available active and passive ROM can be measured objectively using a goniometer.

First among the Functional Tests is the Active Range of Motion. Abbreviated as AROM, it defined as joint motion performed voluntarily by the individual through muscular contraction. Unless contraindicated, AROM should always be performed before passive range of motion (PROM). The AROM indicates the individual’s willingness and ability to move the injured body part. Active movement determines possible damage to contractile tissue (i.e., muscle, muscle–tendon junction, tendon, and tendon–periosteal union) and measures muscle strength and movement coordination.

Measurement of all motions, except rotation, starts with the body in anatomic position. For rotation, the starting body position is midway between internal (medial) and external (lateral) rotation. The starting position is measured as 0°. The maximal movement away from the 0° point is the total available ROM. For example, subjective measurement of plantar flexion against gravity involves placing the individual prone on a table with the knees flexed. Next, both thighs are stabilized against the table, and the individual is instructed to plantar flex both ankles. Comparison of movement in both legs indicates if plantar flexion is equal bilaterally. 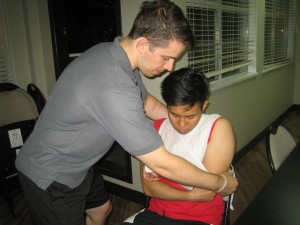 Limitation in motion may result from pain, swelling, muscle spasm, muscle tightness, joint contractures, nerve damage, or mechanical blocks, such as a loose body. If the individual has pain or other symptoms with movement, it can be difficult to determine if the joint, muscle, or both are injured. It is important to assess the following: the point during the motion at which pain begins; the presence of pain in a limited ROM (i.e., painful arc); and the type of pain and if it is associated with the primary complaint.

Anticipated painful movements should be performed last to avoid any carryover of pain from testing one motion to the next. Also, age and gender may influence ROM. Women in their teens and early twenties tend to have a greater ROM in all planes compared with men. Range of motion decreases after 20 years in both genders, with the decrease occurring to a greater extent in women.