Throughout the years, running has been considered as a convenient way to exercise that can provide a number of health benefits such as improved health, weight loss and relief from stress. Nevertheless, running also has its share of drawbacks that you have to be familiar with. The occurrence of knee injuries is common due to the high-impact that the joints have to endure with each step. Most of these knee problems can be avoided by taking into consideration certain measures such as wearing proper footwear, proper stretching and an individualized training routine.

The iliotibial band is basically a dense layer of connective tissue that goes through the exterior edge of the thigh starting from the pelvis up to the exterior of the knee. Iliotibial band syndrome ensues once the iliotibial band rubs against the bones in the leg during activity, resulting to inflammation. This condition is considered as one of the common knee problems among runners and more common among women. Those who engage in long distance running face a higher risk for this condition.

The condition causes pain and even swelling on the exterior part of the knee. The pain tends to intensify if the knee is bent which stretches the iliotibial band. As a first aid measure, you have to instruct the individual to rest. 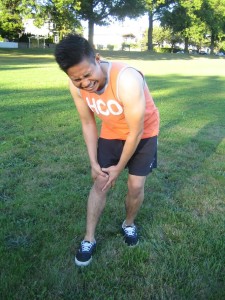 Iliotibial band syndrome causes pain and even swelling on the exterior part of the knee.

Strain on the hamstring

The hamstring muscles that run down the rear of the thigh are responsible for bending the hip and straightening the knees. Unfortunately, these muscles can end up strained especially when sprinting. Hamstring injuries can trigger pain in the rear part of the knee that can spread to the rear of the thigh. Take note that this injury can be minor or serious as a tear on the muscle. The pain caused by a hamstring strain tends to worsen during weight bearing, causing the individual to limp. If the individual could not bend the knee or walk, it is important to seek medical attention.

Patellafemoral pain syndrome is a common knee problem due to running which is also called as runner’s knee. The patella moves along the groove at the lower end of the thigh bone while running. The pain is triggered once the patella moves out of the groove, rubbing against the underside of the kneecap against the thigh bone. This pain is similar to an aching sensation that is usually felt in front of the knee.

The condition can be caused by weakness in the quad muscles especially on the middle and interior of the front area of the thigh.

The meniscus is the cartilage that provides cushion between the lower leg bones and the femur. As time passes by, running will cause damage to this structure. While running, the fluid moves out of the meniscus and the fibers that comprise this structure end up deformed. As a result, the meniscus can tear, causing pain and the sensation that the knee is about to give out once weight is place on it.

The treatment for running injuries will depend on the underlying cause. Nevertheless, most of these injuries resolve with conservative treatment including physical therapy. The doctor will prescribe anti-inflammatory medications such as ibuprofen or naproxen. In some cases, a steroid shot can be given to minimize the symptoms. As for severe cases, surgery might be required.